Toddlers - can't eat them, can't throw them back

I am not totally fond of the toddler stage. Maybe it's because I had my kids very close together. I have a double serving of an entree I cannot send back to the kitchen. I think even if I only had one I would still struggle with the toddler phase. I jsut don't seem to know how to communicate in toddler-speak.

I am not one of those mum-type mums. I am not one of those people that would say that being a mum was the best thing they ever did. I am not a mum who wants to meet up with other mums in the park and do mum things. I never did the mums-walking-with-prams-together thing. I never joined a mother's group. I didn't relish the mother-of-toddlers role as much as some mums do. Don't get me wrong, I love my little people to death but I think I am more suited to being a worker than at home ALL DAY with two mischievous toddlers.


I have tried to enjoy this phase by coming up with all sorts of activities. And we do have some incredibly good times. They can make me laugh till I am crying. I do painting, craft and outdoor stuff with them as much as the next mum.

But I often get frustrated with some of their extra curricular activities.

I have minimal time for Hammerhead's somewhat inventive party tricks. When is he going to work out that covering everything in the bedroom with a thick layer of powder is not going to make me laugh? Why, when we are cooking, does he grate the empty eggshells and throw them into my cake mix? Why does he pour all of my expensive (and now extremely precious) hair products down the plug hole? Why does he draw all over himself in black texta when there is a whiteboard right next to him? Why does he put his battery-operated toys into the front-loading washing machine? Which reminds me WHY DID WE EVER PURCHASE A FRONT LOADING WASHING MACHINE WHILE WE HAVE TODDLERS? (sorry that's another post entirely)

I thought this stuff would have stopped by now. I thought he would do this stuff once, find out it is not funny, be heavily involved in the clean-up and then it would never happen again. WRONG. No end of threats or punishments or lack of special treats has changed any of this. He thinks it is extremely hilarious stuff every time. Cracks himself up.


There are too many things to go into with Barnstormer. She is way too clever. She is far, far more intelligent now than I will ever be. However, despite knowing how to download and print out a set of pictorial instructions for her zhu zhu pet using my iPhone and question why Julia Gillard is rarely seen with Tim Mathieson, she still does not understand that when the ice-cream carton is empty, a full new icecream container will not magically appear in its place. She might even scream the house down about this.

Together Hammerhead and Barnstormer are capable of some crazy stuff. Barnstormer is the more sensible but can easily be led astray. Last week we made pizza. We do this often. I like to make the dough from scratch. The kids love to roll it out on the table once it's risen, but when my back is turned, as is often the case with the layout of our kitchen, no end of mayhem can eventuate. One minute they are busily rolling their dough and kneading it into creative shapes. The next minute, as I slice up the pineapple on the bench, all of the flour is tipped onto the table and the floor by Hammerhead and he is rubbing his hair in it. Not to be outdone, Barnstormer has rolled her crayons up inside her dough and is using this new invention to draw flowers on the table. I always wish I had taken photos or even a video (like this one) but am far too angry at the time.


When I was nearly five butter wouldn't melt in my mouth. I was mummy's princess. I rarely had a hair out of place and could start humming the orchestral movements of Swan Lake at any given moment. Mum was most proud. And mums BACK IN THOSE DAYS weren't complaining about toddlers. Mum had two younger ones besides me and she wasn't sitting around blogging to vent her frustrations. Mums back then were not whinging to anyone who would listen about how hard it is to have a shower without some small person telling you to get out of the way of the water. They didn't even have microwaves or dishwashers or disposable nappies. Not once have I ever heard my mum say "You kids used to drive me INSANE when you were little. It was a crazy time in my life". Nope. I think even now (that they are grandparents) they look and think what the hell are you complaining about? Actually, that's not true. My mum knows what mischief my little elves are capable of ...

And those people that say teenagers are horrid, do they not remember the toddler phase? We have a teenager and I would rather have five just like him--even teenage girls--in exchange for a double whammy of the 3-5 year old phase. At least they know that NO means NO.

So darling Hammerhead, aka Mr Mischief, turns 5 in less than three weeks. I cannot realistically expect that the party tricks are going to cease. We think it might be another year away. 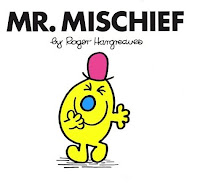 I miss being able to go to the loo without one of my toddlers coming in and trying to have a conversation!!! I've tried to explain that it's my private time but alas no avail!!

A shower that takes longer than 3 mins would be nice!!


It would be really nice that when I've cooked from scratch a wholesome meal making sure there's a good balance of food types and costs way more than the pre made stuff that they eat it!!!!!

Oh yes, we are on the same page.
It would be really nice to have a shower alone, even if less than three minutes! I made cauliflower soup the other day and they wouldn't have a bar of it even though it had bacon in it. Then their dad offers it to them as "Bacon Soup" and what do you know - they ate it all and asked for more.