Light at the end of the tunnel

There is the teeniest, tiniest flicker of light at the end of the longest, darkest, most claustrophobic tunnel ever. I am FINALLY getting to the end of the workload for the year.

I promise to write posts of a more profound nature in the coming months. Looking back so far I think this blog is just a melting pot of whinging and general first world nonsense. There are far more important goings on in the world. However, it has helped me to move on with a few things. I don't really know why. But I keep reading that others say the same. I guess putting things out there in the blogosphere brings clarity.

I am, unfortunately, still having a LOT of trouble with the memory. Not so much that I can't remember things, more that I am just VAGUE AS. I can't seem to remember to stay focused on the task at hand. Simple tasks that I have been doing perfectly for 43 years are simply going awry in a bad way. I have just recovered from an INSANE 48 hours. This is what happened: 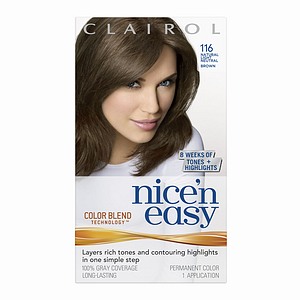 NOT SO Nice and Easy
I'd like to think that all mums and 40 somethings in general are going vague at this time of the year. Am I right?

Oh and today, one of my very good friends sent her daughter over with some toys they no longer use to give to our peeps.  One of the toys was a loud, noisy plastic sword with flashing lights and a neverending series of loud beeps. Far, far worse than a Zhu Zhu pet. Hammerhead was absolutely delighted, never having been the recipient of such an offensive toy weapon. I couldn't bare to confiscate the toy so early in the peace. HM {irate} vacated the premises within 60 seconds while I sat and endured this horrid noise for a few hours, firing off a THANK YOU text to my friend, who assures me the batteries will die any minute. I now have The Surfer on a special mission in the shed (deep down in the dark recesses of the back yard jungle) attempting to use up the batteries as fast as possible.

OK, it's back to the books. Hope you're all having a great weekend. xx
Posted by Triple Jane at 4:23 PM 3 insanely calm and mindful people have commented

Sayings that aren't so

I am completely baffled by the phrase "slept like a baby". Like most other babies on the planet, my babies slept for two hours at a time, woke up, cried and needed a nappy change. If I was lucky, they went straight back to sleep and repeated the cycle later on, OR they carried on for a bit and then called out again every five minutes just to see if I would come up and visit. This went on for a few months, actually, some nights it still goes on with Barnstormer, albeit minus the nappies. So in my personal history as a mum, I would hardly be truthful in using the sleeping baby phrase as a way to describe a comfortable, blissful, uninterrupted eight hours of luxurious sleep. 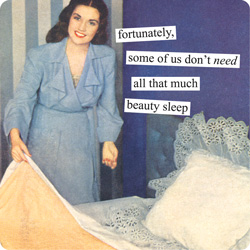 Instead, I would say "I slept like a teenager". Every night The Surfer sleeps like a baby. He could sleep through an earthquake. He could sleep through a demolition even if it was happening in his room. When I was pregnant, I was so worried about the fact that his bedroom was next door to the baby's room, I lay awake at night wondering how on earth was I going to sound proof things. The night we bought Hammerhead home from the hospital--and I should clarify that our new bundle of joy was named "Hammerhead" within hours of his birth for his tendency to open his mouth like a shark at the whiff of some food--I was more worried about The Surfer waking up than Hammerhead. Our darling baby boy was a feeder. A BIG feeder. So anyway, Hammerhead was up two or three times that night and of course, The Surfer had no idea. For all he knew, I was still in the hospital with Hammerhead. NOTHING had changed with his night time routine. He had his bedroom door wide open even. DID NOT HEAR A THING. I was so relieved--and it continued. The Surfer slumbered through no end of nonsense. And even Barnstormer couldn't break him. Not even with her midnight demands for weetbix. The demands that even the neighbours have commented on. 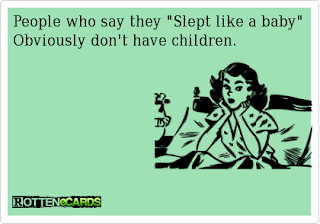 Some people think it should be "I slept like a husband" but I cannot personally relate to this. HM wakes up if someone across the road steps on a tissue. I may have mentioned before about his keen sense of smell--well he also has bionic hearing, just like Jamie Somers. So, he is up and down like a yo-yo all night, trying to find the would-be home invader which is, more often than not, a branch of a tree brushing against the house. Or a fly daring to land on the outside of the sliding door. He may be the only person I know that sleeps worse than a baby.

Another saying I don't quite relate to is "the house looks like a brothel". Now, my experience with brothels is somewhat limited. In fact, I have only ever been inside one on television. Having said that, I was a big fan of the series Satisfaction, which had an uber cool Melbourne-chic brothel. It reminded me of a time in my single life when I had a massive bedroom that I painted "Cadbury chocolate purple" and finished with silver picture rails. Everyone (including my own father) told me it looked like a room that should be rented by the hour, yet this brothel-esque room was ALWAYS immaculate. This was of course, pre-kids, back then when my house was spotless and I was out for dinner every night drinking champagne. THAT TIME was the only time that I could honestly say my house looked like a brothel. Now, I say it "looks like a tip". I find this is a much more accurate description. 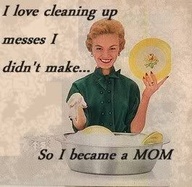 What sayings do you have a problem with?
Posted by Triple Jane at 9:17 PM 5 insanely calm and mindful people have commented