I originally started this blog as a form of free therapy to help with my long-time depression. This blog used to be called INSANE JANE but then in a sudden fit of SHINING WHITE POSITIVITY I decided to stop referring to myself as INSANE and reverted to my Words With Friends user name "TRIPLE JANE" for reasons I cannot even explain. I thought I could just go with it but now I get emails from people asking if I have multiple personality disorder or if I have triplets or was I actually a triplet. Someone once even asked me if I was a massive fan of Triple J (?). Make of it what you will. But I guess it all comes down to the triple word score in Scrabble and I am an editor by trade. I love playing with words.

I live with a surfer, am a mummy of two and had the good fortune to inherit a teenager who I love as my own. I work from home (at all hours!) so I can ferry the darlings here and there. But mostly I make the man drive them around.

I don't really blog anymore as I have returned to FULL TIME WORK teaching students in remote and isolated places online. I can't tell you how much this has helped with my depression.

Other things about me in no particular order: 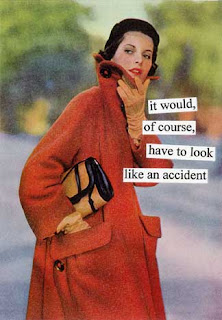 Thanks for stopping by my girl-cave on the web.