More on the anniversary

The Nigella-cake was downgraded to a carrot and coconut cake due to a lack of chocolate and cocoa in the pantry. Hammerhead and Barnstormer were heavily involved in the production and the recipe was severely meddled with. The sugar was meant to be creamed with the eggs and oil but Barnstormer--a sugar freak--quickly added it to the dry ingredients instead. Hammerhead's contribution to the meddling was an extra egg and also MORE coconut. We persevered and cooked it anyway. It was not the disaster I was anticipating and everyone enjoyed it. 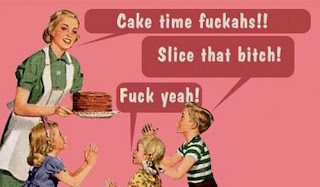 It was about this time that I thought we should at least have a toast. And I mean a real toast not some lime and soda toast. It's been four weeks since I have partaken and as I have mentioned before, this has not been that difficult, but right at that point, after a long day with the troops inside, I wanted nothing more than a celebratory wine.

As if he could read my mind, HM made some fluff about needing something out of the car (at a time when it was pissing down and nasty). He soon returned with the most beautiful bottle of cab merlot.

And we sat and had two exquisite glasses of wine and many toasts to us. 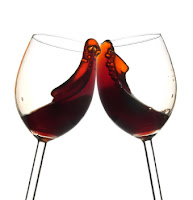 Working great so far; no birthday card, gift, no mothers day card, gift; ( does he go by Uk's dates or France's; decided good excuse for neither)!!!

Ok so he brought us an all singing Xbox 360 so I can run my movies stored on my hard drive through it and I can keep the kids occupied waving their arms in the tv like a Jedi to move stuff on the tv but after 13 years together, 10 married ( Anniv 5 aug) and reminders every godamn year he still does not get that to keep me happy he needs to send me a bloody card!!!! Even if it's the crappiest bloody card in the world: A CARD!!!!!!

Dear Pom,
You need a blog of your very own! xx