Ok, the weekend is over. Thank goodness. Much as I love quality family time, it usually involves the house being in a perpetual state of mess. I seem to be able to tolerate mess a whole lot better that I used to. In fact, I can quite comfortably lounge around in it without feeling the need to straighten a floor rug or get the vacuum cleaner out when someone eats a toasted sandwich in the lounge room. I can even withstand a box of lego scattered all over the floor that someone has long since stopped playing with. Gone are the days where I would sweep the floor ten times and have the house looking spotless JUST IN CASE there was a random drop-in. Actually, that was never really the reason, the reason was I just simply could not stand to see mess and disarray. Could.Not.Stand.It. I had an anxious feeling that something bad would happen.

It began in the late nineties and continued through to the early noughties. I went through an obsessive period where I couldn't handle a jumper being thrown casually over a lounge. I could not EVER stand to see one dirty cup near a sink. I had to wash it. The sink had to be clear of all dirty dishes ALWAYS. I hated when people moved my books in my book case. I had them in alphabetical order. I would break out in a sweat if someone turned over a corner of a floor mat, and I would have to sit and fight with myself not to get up and turn it back. I had to touch wood every time I thought of something bad happening--to the point where I nearly had a serious accident trying to touch wood while driving. I couldn't stand to see one item of washing in the washing basket. I would go and hunt down enough dirty towels, sheets and socks to justify a wash. I could not handle a dirty mark on a shirt. I would not even attempt to sponge it off, it would have to be machine washed or dry cleaned. I couldn't handle a wet bath mat. It had to be dry every single moment and if it wasn't it would have to be put on the line until it was. I could not stand to see a crooked picture. I couldn't walk on cracks in the footpath. All of the cups had to have the handles facing the same way in the cupboard. My wardrobe--which was a pole suspended from the roof--was colour coded. It was like a rainbow of colour.


Most people just thought I was neat. They had no idea of the anxiety behind it. I had a friend who would come over and challenge the neatness by randomly upending rug corners and making my pictures crooked when I was out of the room. I once made all of my girlfriends help me clean the apartment after a cocktail soiree before we headed off into the night. There was absolutely no way I could come home to mess. It wasn't just at home either, if I went to someone's house and they had a sink full of dishes, I would get up and do them and I would take great enjoyment in this act. You people know who you are and it will never happen again. 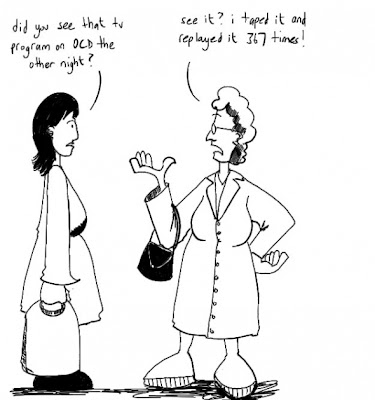 This obsessive period ended, somewhat abruptly, when Hammerhead was born. We came home from the hospital with our darling boy and I spent three hours cleaning the house. I was trying to prove that I could keep a clean house and a baby at the same time. I should have been cuddling the baby. I should have at least been attempting to sleep. I then spent the next few days changing my shirt every single time I got spewed on. Hammerhead was a serious vomiter. I soon ran out of clothes and it was winter which meant that drying the washed clothes was virtually impossible in the timeframe I needed them. I became extremely upset and anxious about this and very depressed. I needed help.

My wonderful obstetrician and the extremely patient HM steered me in the right direction. I embarked on a course of cognitive behaviour therapy over a period of twelve months, directed by a fantastic psych. She did such a number on me that I now simply ignore mess and even help create it. Now, I don't care if people come over and I haven't vacuumed. I don't care if there are dishes in the sink overnight or, heaven forbid, when people visit. I don't care if the baskets of unfolded washing are in full view. Actually I DO CARE, I just don't have the compulsion to worry about it or worse, get up and sort it right then and there. 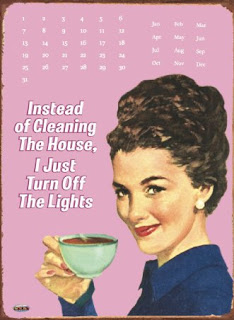 I am not completely cured either. I still have remnants of the old behaviours. For instance, HM cannot stand the way the kitchen table is constantly being wiped down--sometimes I lift up his cereal bowl while he is mid-spoonful to do this. I also don't think he comprehends my need to whip off the kids clothes the minute they dirty them and put clean ones on. He endures movie after movie where I sit there constantly spotting continuity errors rather than focusing on the plot of the movie we are watching. He does not understand how this makes me almost as excited as he gets when watching an AFL grand final with his team in it.

I also have a new set of compulsions that have replaced the old ones. Now OCD means Obsessive Computer Disorder. My folders and documents are always neat and ordered. My desktop is clean. It is something that I can control and that no-one else can touch! I am a squeaky-clean geek.

I still dream of a real world of clean surfaces and spotless floors. But it's never going to happen in our house. At least not for another 20 years. And I have realised that I can live with that. I think.
Posted by Triple Jane at 12:04 PM

I am loving reading all these blogs, because it is nice to know that other people have some little hang ups that have become bigger hang ups as you get older and have less time or places to vent about it. Facebook used to be the domian for random vents on the frustration of family life, but when your husband becomes your "friend" it is hard to vent about wanting to smash his face in without him knowing you are talking about him. He apparently doesn't mean to leave the dishes on the counter when 3 steps away ( I know I counted) is an empty dishwasher waiting to be filled. And my small child feels that if she says sorry for leaving her shoes at the hallway door, when her room is 10 steps away ( counted again) that it makes it ok for me to pick them up. So when I decide mess is ok, and I won't pick it all up, they ask me if I am OK? Am I feeling unwell, and will I recover soon, because they are hungry, and can't find their shoes....
Anyway enough about me, please keep writing, and I hope the black dog is safely in the kennel. xxxx

Yes, HM is on facebook and is what I call a facebook stalker! He never comments, never updates status and acts like he never checks his account. But if you write something, he knows.

Also, I'm afraid we've probably both made our tidy beds and we must now lie in them. I have put away one too many messes in this house and now they just think that's my job! xxxx

I fear that is where I may be headed! As you know I am a neat freak, although I don't care if the kids spill something on them - I don't need to change them. My tidyness is limited to my house only - my car is a complete tip! But I am getting worse .... WAY worse.