I compose the most scintillating blog posts right before I go to sleep. I'm too lazy to get out of bed and write them down at the time. I can't remember a word of them the next day. I can't even remember the topic. I pretty much can't even remember going to bed. But I remember my dreams. Always. I've even talked about this before. But anyway, getting back to what I was saying ... these so called amazing posts never eventuate ... and during the day I seem to be going through a phase of wordlessness.

So I'm resorting to two bottom of the barrel anecdotes here:

1. The Pre-primary school play: In about two weeks time Hammerhead's class and the other PP class are presenting a nativity play (with a twist) at an extended school assembly. As I've mentioned on FB he has the illustrious honour of portraying a sheep in this play, which will be his dramatic debut appearance. It is a non-speaking role. We were all instructed early in the term to organise a costume for the character and Lordy, you would think that it was the costuming department on the set of Moulin Rouge. There are a MILLION costume-related emails criss crossing each other with far too many reply-alls.

Mrs X is concerned that every single costume hire place in the universe has costumes for Moses (was he even there??), Jesus, Three Wise Men, Joseph and Mary, but no shepherd costumes. HELLO--when I last looked, shepherds in those times were pretty much wearing a sheet with a basic cord to secure it and donning some kind of Yasser Arafat tea towel headware. Surely, one can find these things at home in the linen press.

Mrs Y is in a flap about the fact that not everyone who needs an angel costume has followed her lead and purchased the $35 angel costume off eBay as per her email instructions which she promptly sent out the night that the costumes were allocated. She is now upset that the various angels are not going to be coordinated. Mrs Z laments the fact that all of the angel costumes seem to be designed for girls and does not want her boy wearing an angel frock.

We must remember that it is a pre-primary play for the parents and not the high school drama  extravaganza a la Mr G.

I guess I should be thankful that they do a nativity play at all in these increasingly silly PC times ... 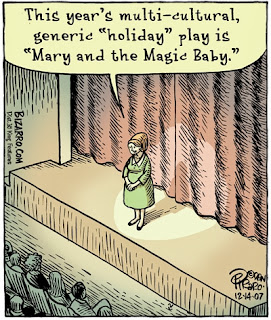 Meanwhile, Hammerhead is running around sniggering every time someone mentions "baby Jesus". In fact, the other day, when he was gobsmacked about something, I heard him utter loudly: BABY JESUS! He now sees this as a legitimate way of using what he calls a 'swear word'. He is still mystified as to why Mary and Joseph named the baby after a swear word in the first place. Actually in this house we call them 'shed words'. They are words that HM occasionally uses in the shed that are not to be uttered anywhere else. Sometimes they are also called 'footy words'.

Actually, now that I think about it, a modern day PC version of those times might be really funny. Imagine doing the Wedding at Cana where Jesus turns water into wine. I'm sure it's been done.

2. Coincidences: The other day HM and I were privy to a number of crazy coincidences all in the space of an hour. It was like The Twilight Zone. In short, while playing at the park (the kids not us) we discovered that one of the school mums lived in the same apartment in Highgate that I lived in for seven years... in the same room, for pretty much the same amount of time and even had the exact same reminiscences of the area and the scary neighbours. This apartment is worlds away from where we live now. And her name is Jane. Bizarre.

Then walking home, we discovered that the grumpy old man who lives across from us (the one who washes his 4WD every single day) used to share an office with my dad in the small country town where I grew up. The final coincidence of the hour was that said grumpy man mentioned a teacher to HM whom he may have met at his new school. HM had not heard of this person and there are hundreds of teachers at the prison school where he works. End of conversation and we returned home. There on HM's phone was a text from that very teacher ... he'd been asked to get in touch with HM by the deputy for some reason. BIZARRO. What does it all mean I wonder? 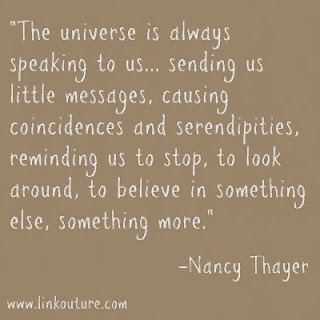 Ok, so that's it. Two quite unrelated anecdotes and I'm done.
But I would like to know if anyone else is experiencing weird coincidences of late.