The perils of living with a sniffer dog

Back from Dongers. Nothing like glorious sunshine to really lift the mood. I didn't even feel melancholy on returning home. It's all good.

Had a splendid time EXCEPT I made an initial, monumental, a what-the-hell-were-you-thinking-type faux pas while doing my last minute packing. This horrid error involved the packing of not one, but two bottles of nail polish--as you do when you are going away to a small, sleepy country town to hang on the beach with tomboyish hardcore surfer mums who put "hey" on the end of every sentence. 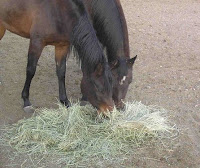 What do horses eat, hay?
I'm very good at joining in these conversations.

Now I should mention at this point that HM has a nose like a sniffer dog. He can smell a cigarette being lit over a kilometre away. If there is a fire in Fremantle, he can smell it. If someone burnt some eggs in Armadale, he knows about it. If someone is spraying toxic fertiliser in Yanchep, he winds the windows up. Already, there are rules in place at home to accommodate his sensitive olfactory problem. I am not allowed to put nail polish on inside the house. I am not allowed to use fish sauce in ANYTHING. I am not allowed to use Mr Sheen. I happily abide by these rules and The Surfer has to be ultra careful with his daily teenage angst-ridden application of Lynx.

So as we embarked on our road trip, HM enquired as to whether I had been painting my nails. I said of course. YES, the toenails got a pre-holiday coating outside in the backyard as pre-arranged (see house rules above). Nose was turned up at this comment. We got to the end of the freeway and HM could not stand the smell any longer. I was questioned on the contents of my bag. DID YOU PACK NAIL POLISH IN YOUR BAG? Why, of course I did. Who doesn't when they are going to Dongara?

No one else could smell a thing and the little people were concerned at the kerfuffle.

A few minutes later, in a complete olfactorial meltdown HM had to pull over at a servo and I was asked to check the contents of my toilet bag (which naturally was packed as deep inside the boot as one can get) for a leakage. Sure enough, one bottle HAD smashed but the damage was thankfully contained. I removed the offending bottle and wiped away drips--in the process getting a smudge or two of nail polish on fingers. Oh, calamity.


The ever so faint whiff of nail polish to mere mortals is of course a foul, toxic, pungent stench to HM, as bad as if someone had made him swim and breathe in the stuff. He could not think straight. It was all he could talk about and the entire trip there was RUINED by this acrid stink. Even my homemade gourmet salad rolls tasted of nail polish--for him.

When we finally got to our destination, HM scrambled out of the car like he had been locked inside the toilet cubicle on an aeroplane with a vomiting skunk. The offending toilet bag was not allowed in the chalet and was condemned to hang from a tree to "air out". {HM really wanted it buried but I reminded him it was a birthday present.}

All of the five sets of clothes HM has packed (for a trip which will see him wear the exact same clothes he drove up there in everyday) were hung out and aired in various parts of the chalet. It looked like a Chinese laundry.

But at least my toenails looked flash on the beach, hey!

The French have a word for him

I'm painting my nails in sympathy darls!!!
The pom

Next holidays try nail foils- dont require any re-application unless they fall off, which might mean a bit of glue sniffing. One of the year 7's did mine before my holiday and I'd go as far to say that they were a big hit!

Men! If I keep writing posts about mine, I will be living without him!!! xx

Next hols I think I'll just forget the whole thing. Glue is up there with nail polish with the sniffer dog. And if it's toxic glue then that is a whole new ball game of OCD melodrama. But thanks for the tip x

Too funny....can just picture that all happening as well, ha ha x