This is what happened in our house today:
HM and The Surfer decided that after MONTHS and MONTHS of enduring a broken kitchen sink tap, it was high time that something be done. I suspect they really thought it might be time to put an end to the non-stop nagging from me.

Just a bit of background ... the tap started leaking well over a year ago. It has been tinkered with a few times by HM and The Surfer and always there is some glitch in the proceedings which results in a fruitless trip to Bunnings and some sticky tape over the offending leak--and nothing is done until next time.

For the last two months the tap has been leaking like a fire hydrant and must be covered up with a tea towel. It is not very becoming. And now they've taken the tap out completely. 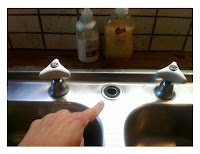 HM and The Surfer like to adopt the names Nigel and Brad when they go into what I call tradie mode. Unleashing their inner tradie. They laid the lounge room floor boards as these alteregos, complete with singlet and low hung jeans. {insert silly Fifty Shades of Grey joke about jeans that hang from the hip. Oh my!}

And I have to say Nigel and Brad are capable of a job well done. Several other man jobs have also been successful and one really should be thankful that these 'tradies' are around. However, sometimes the mentality of Nigel and Brad leaves me just a little concerned.

Regarding the tap issue, it is clearly a job for a professional plumber with possibly ten years experience in kitchen sink leaks. However, Nigel thinks getting a plumber involved is a waste of money and has full confidence that he can DIY with the best of them. Instead he will spend far, far more time and money than a one-off plumber visit would ever cost by travelling all over town, to-ing and fro-ing from one tap shop/plumbing supplies to another on several occasions. I have even been taken on one of the tap shop missions myself. It is as mindless as they come. We always leave empty handed and I look enviously at the other people departing with a box of some description. No tap shop in the southern hemisphere apparently stocks what HM thinks is required. I've offered to look for something on the net but my help was declined. 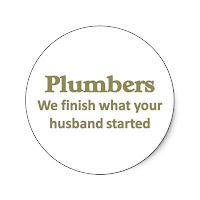 So now the entire contents of the cupboards underneath have been emptied and to the tradies' horror, water from the leaking tap has wet all of the chipboard inside the already very ugly area under the sink. Me, I knew this all along. Even told them. The stench of damp should have been enough of a giveaway. And still they are surprised.

The dishes from three meals (x 5) are lined up at the top of the sink. Soon there will be no clean dishes or cutlery and I am thinking I may have to use the laundry sink. *Late note: Have since discovered that I can use the laundry bucket to put hot water into kitchen sink and am ashamed that it took me all day to think of this. I dare not let HM see this as he will think it is OK to not fix the tap in any great hurry. Anyway back to the story ...

While Nigel and Brad were off at the tap shop, I used the hair dryer in a pathetic attempt to dry out the cupboards. It made no difference whatsoever.

In my boredom, I reverted to entertaining the kids with LEGO. Hammerhead was given a  recycling truck for his birthday--he loves anything that goes BEEP BEEP BEEP when it reverses--and of course I have had to construct it. It takes about an hour to build and is very complicated despite saying it's for 5+ on the box. Maybe that actually means you need a 5 years+ engineering degree to build it. Anyway, each time I have made it, with Hammerhead always watching on closely, he has taken it from me at the end and almost immediately broken it up again into hundreds of tiny Lego pieces. What is it with boys and breaking things/taking them apart? The first two times I didn't care, but today I clearly threatened emphasised that I didn't want it broken up again and I would not be rebuilding it. He now has to wait until he has a 5-year qualification in mechanical engineering before he can play with it again.

So today I have had NO TAP, a never ending supply of unwashed dishes, two ratty kids in destructo mode, a smashed Lego truck and no working hours racked up. But it doesn't end there ...

I arranged to go and visit my sister in the afternoon so the kids could play together and I could sit there and whinge drink tea. I went outside to hang out a load of washing and on my return I discovered that everybody had vacated the premises, including the little people. It would appear that Barnstormer and Hammerhead had been seconded on a tradie run to the Tap Shop. Apparently I could not be found to say goodbye to. Have had to ring up sister and cancel.

So here I am whinging blogging about it. I really should be doing some work. And be thankful that the small peeps are out and about all over town.
Posted by Triple Jane at 4:25 PM

That is hilarious...you should get a plumber in when they are out and just tell them you fixed it yourself!! Anyhow hope it gets sorted soon.

I see your delimma and raise you a tap that has been leaking for around a year - that my HIM says just needs to be turned off tighter. SO tight in fact noone has been able to turn it on for 6 months. Yet it still leaks!!! Sigh, there are none so blonde... Sorry blind, as those that cannot see!!
And I have the full set of the fire City Lego (3 boxes) and a missing propeller !!!! Can you imagine the autistic take on that !!! Muuum ....

The thought has crossed my mind ;P

Your HIM sounds just like mine. And get this, HM decided to persist with the tap problem TONIGHT during nutcase hour (which actually goes for three hours in our house) using only the light of a torch. Definitely not the time to be grovelling around the sink.
Re the lego: Don't you hate it when something is missing? The kids just don't understand the importance of picking up every single bit. HM has told me that I need to calm down and that Lego is supposed to be a fun activity not a German prison camp.