I'm angry today. Angry with everyone and everything. NO one has done anything in particular that bad. But even just the slightest whiff of disagreement with anything I've said or done has resulted in a verbal assassination of offending person, be they standing in front of me or at other end of a computer email.

HM made a hurried exit [see below] house to avoid the wrath. The Surfer is at school and thankfully oblivious to the storm. Barnstormer is actually behaving and has piped down about not having matching clips in her hair. I think she must not be feeling well. Hammerhead is knee deep in Angry Birds and informs me he is up to a level far higher than has ever been achieved by anyone else, EVER. Which is probably a good thing because he has a very, VERY angry bird for a mother.


Why am I mad? I do not really know. But it is a classic case of INSANE JANE. Where seemingly tiny things get blown right out of proportion to create a CATACLYSM of epic scale.

Case #1
The publisher I am dealing with casually mentioned a few things of concern about my latest manuscript. In a fit of rage, an email that one MAY perceive as nasty, sarcastic and accusatory, was fired off by moi. I shouted and muttered over my computer while HM made coffee. He read the publisher's initial email and could not really see what I was so peeved about. At this, the volcano inside me erupted and verbal lava spewed out all over poor unsuspecting HM, but obviously not aimed at him. Exit HM stage left. 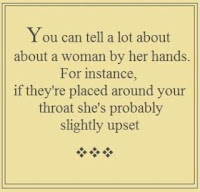 So then I reread her email. And turns out there wasn't really anything that bad in it at all. I quickly fired off another apologetic, begging and grovelly more coherent reply.

Case #2, hey
The surf mum that follows HM around like a BAD SMELL--even worse than NAIL POLISH--has also copped it, hey. HM innocently mentioned to me some of the questions she had been asking him ABOUT US and it was all too much for me, hey. She has been defriended on Facebook, HEY. Thankfully he thinks the same about her as I do, hey. What is it with some women, hey? And she's married, hey. I would possibly understand a bit more if she were single but to blatantly stalk attempt to flirt with another parent at every surf comp is just not on, hey. The fact that she ignores me ALL THE TIME just adds fuel to the fire, hey. HM says she is one step away from being a bunny boiler. 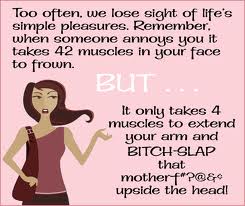 But really, on another day her inane questions to him probably wouldn't even bother me, hey. And I think she just stares through me in wonder as she knows that we do not have A SINGLE THING in common, hey. Or maybe it's because she knows I am onto her bunny boiling aka "Play Misty for Me" strategy, hey. 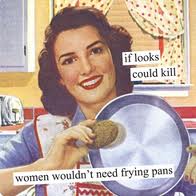 Case #3
HM {home again hoping that good calmer karma has come my way} informs me that it is going to take MONTHS to get an appointment at a skin cancer clinic with a specialist. He's had conflicting reports from two GPs and wanted a third opinion before they go all Jack the Ripper on his back. All of a sudden I find myself drafting out an email to The Hon Tanya Plibersek MP with some key recommendations to funding priorities for mental health skin cancer screening.


Some time later ...
Ok, breathe in, breathe out. I'm calmer now and the angriness seems to have passed. Relax. It's Friday. It's whine wine night soon.

Oh and why the new look? {What new look I hear you ask?} Well, dear sister said she traversed upon a blog that had my retro pic background. It was just an image off the net. Hmmm, so I've found a new one. As they say, a change is as good as a holiday. I think I may leave the old image on the FACEBOOK page which is here for anyone who hasn't gone there yet.
* Late note: Have reverted to original look. It was a short holiday.

Well...
I like the old retro background...
There is a Skin and Mole Clinic at Joondalup that should be a shorter wait.
I got TOTALLY pissed off with someone that parked right next to me in the carpark at 7am WHILE I HAD THE DOOR OPEN ON THAT SIDE but there was hardly anyone else in the carpark - WHY PARK THERE - I knew it was going to be a grumpy day.

Glad I am not the only angry bird around today. Must be something in the air. I absolutely HATE when people park next to me when there are other available parks. I used to go NUTS when this kind of thing happened when I had the pram or kids/car seat fiasco going on.

I'm with you, I like the old retro background too. I'm changing it back right now. I don't care if someone else has it. This cherry blossom stuff is annoying. x

I completely missed the cherry blossom experiment but have to say I really like this background.Re: angry bird mum, I don't think my kids think/know there is an alternative!

ps. re bunny boiler surfer mum, I hate that so much! I have been known to give someone a sharp rap on the head with the handle of a dinner knife and a rather pointed talking-to after being ignored and disrespected while they flirted outrageously with the UH. Oh yes. And I'd do it again.. *sharp glare*

I like your style Startled Life. I am seriously going to be doing something next time I see her if it's more of the same. {cue evil Psycho music}

The Cherry Blossom makeover really was a blink and you miss it experience. xx