Put on a happy face

There is nothing like a bit of winter sunshine to really sort out the symptoms of seasonal affective disorder (SAD). Yes as I have mentioned before I get sad with SAD. But when I drive down West Coast Highway on a glorious day like today I become the shiniest, happiest person in the whole city.

I even started singing to the kids in the car:

And spread sunshine all over the place,
Just put on a happy face.

Ok, some of you might think that I may have inhaled one too many cleaning products this morning, but it's true. The weather can totally make or break my day. I was so happy to be out and about this morning that I stayed out twice as long!

I wasn't even going to go anywhere but HM did the last minute sneaky-exit-without-taking-the-kids after telling the kids they were going to the beach on the obligatory surf check. This of course was actually a clever ploy to get me out of the house (once the kids think they are going to the beach, you either have to take them or be prepared for no end of harrassment). They simply will not be placated any other way. Not even with ice cream.

So there I was driving down to the beach on the most magnificent of July mornings. SINGING. 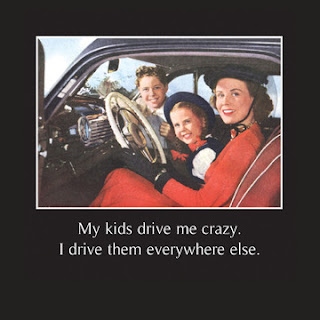 The kids did not utter a sound during my warbling. They did not even flinch.

So we arrived at the beach and the glorious day just continued on. We watched The Surfer shredding it, we sat and made sand castles, some of us walked and collected shells and stuff, we had a muffin at the café and I had the most divine macchiato. For the record, I'm slowly introducing the odd dash of caffeine (and the odd slurp of vino) back into the diet. In my hiatus I learned this: 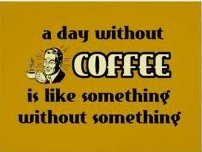 But just getting back to my choice of song for a minute ... I recently decided to stop putting on a happy face, as in stop pretending to be happy when obviously not feeling happy. Stop pretending to the girlfriends and extended family members, while letting it show at home. I realised that this was not that healthy (or genuine) and was a continuing part of the charade that I had so often played.

It took me a while to realise that it didn't matter where I was or what stage of my life I was in, there was something in my brain that just wasn't seeing the good stuff in life. It was only seeing the bad stuff. When my life experienced any major change (one of many), instead of being happy about the future, I was deeply upset about the loss of the past. And I have wine. But for all the right reasons now. Cheers!
Posted by Triple Jane at 10:00 PM

Beautiful Jane, I can really relate to this. Good on you for actually taking the kids to the beach, I probably would have put a DVD on.

Brings to mind a song

People say I'm the life oh the party cos I tell a joke or two, although I maybe laughing loud and hearty, deep inside I'm blue!!.....

Smokey sang it best my friend.

I am taking a good look at your face; it's the face of a beautiful, intelligent, authentic, genuine fab person!!!!!

I love that west coast drive and do a similar one along the bay of juan les pins at least twice a day just for that feeling; sun on your face, glittering sea and the most beautiful azur blue sea!!! Ah life is good but it's not always perfect!!!

We love you, Jane, and we love you to be happy, so, come on, put on that happy face or, as Tony Bennett sings in those fabulous words of Charlie Chaplin,"You'll find that life can be worthwhile...if you'll just smile."
A very interesting blog. Is this the start of a series?

Glad to see caffeine and alcohol allowed back inside the circle of trust. Why not give something easy up next time, like sugar? Your children are very tolerant. The other day in the car Lucy announced " Mum, let's sing a song you don't know the words to" Ouch !! Keep writing, so I can keep reading x

Beautifully written Jane. I can relate to so much of what you have said. Thanks for sharing it with us. May the sun shine happiness on your life :) Cousin Nat xx

Yes. I am so glad we got out. If only they could bottle sunshine xx

We should swap houses one year! xx

Funny that you said give up sugar -- I've noticed that I've been consuming a lot of sugar lately ... the odd chocolate frog here, many cups of sweet chai latte, etc. It's like you give up something bad and you take up something new that is just as bad as the old. Am waiting for your guest post missy! Come on, you must have a hatful xx

NO it's just another post on the blog. Sorry Dad, cannot change the name. Those ones you suggested don't rhyme. Also this blog is meant to be anonymous! But I am glad you have read it. xxxx

From the depths of winter misery, I relate! And I'm happy you've decided not to hide your feelings. A trouble shared and all that...also, it takes so much energy to pretend to be happy, just when you don't have a lot of it to spare. Just remember you've got another friend down this end of the world who's willing to chat 'til the chirp returns x

Come to the south of France whenever you want darls!!!!