It's only 11.17am and things aren't good.  Day started at 6.30am with HM firing up the iPad (next to me in bed) as I snoozed. What makes him think it is OK to start streaming a surf comp from Tahiti at full volume at that time? It is still dark. Not even the little people are awake and I've got an over the top American surfer accent blaring in my ear. What's more, HM seems to think that I am INTERESTED in this comp and fully expected me to wake up and lean lovingly on his shoulder, oohing and aahing over the various manoeuvres on display. What is it with surfers????????

Anyway, I went seriously mental at him and suggested that he use the earphones that are right next to the iPad. I even implied what he could DO with those earphones if he didn't put an end to the nonsense immediately. He acted all surprised at my attitude. And all this coming from a man who cannot handle me (silently) reading my iPhone in bed at night!!!

OK, then I get up and find that Barnstormer and Hammerhead have done a spot of rearranging in their bedroom while I was snoozing and HM was in Tahiti. Their room is chaotic: the slats are off one bed, there's mattresses blocking the doorway, there's a whole pile of bags with "clothes that are too big for them" strewn all over the floor and every single book has been taken out of the bookshelf. One of Hammerhead's t-shirt drawers has been emptied. When I [somewhat angrily] enquired as to WHY the redecorating, Hammerhead calmly pointed out that they were merely looking for his "favourite white colourful t-shirt" which had gone down the side of Barnstormer's bed! Hmmmph.

Then there's more chaos at breakfast time which I won't go into. But it was something like this without the drop-in.

This was shortly followed up by an email from the publisher re manuscript. Except it's now from the "editor" that has been assigned to the project. Apparently, lots and lots more stuff to take on board. The sort of stuff that should have been mentioned up front. Can I amend 77 pages of manuscript by early this afternoon, Eastern Standard Time? As in NOW. Do they not know that we're behind them? 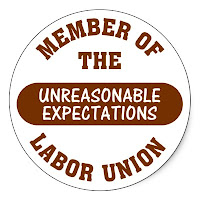 The fact that I am blogging right now should clearly imply that NO, it is not going to happen.

Every single room in the house looks ransacked. Hammerhead has rekindled a love affair with all of the toys that I'd secretly culled yesterday while he was at Kindy and put into a large bag that should have gone into my car boot last night. Wants to know why they're in what he calls a RUBBISH bag. Is suspicious that they are being removed without consultation. We are talking about toys he played with when he was six months old. He is accusatory in tone. He has arranged them all neatly in the lounge room and is guarding them fiercely. He even gave up a ride to a cafe with Barnstormer so as to protect the haul. 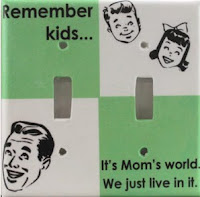 The day must get better. And the day will end with wine. How's your day?
Posted by Triple Jane at 12:05 PM

Yesterday was not a good day ! Paul's first day home and as he got really badly bitten by mozzies last hol ( and still doesn't feel right) his only job for the day was to buy some mozzy nets and put them all up in the bedrooms.

In the morning I asked him if he wanted me to text Tracy see if we could borrow her husbands electric drill as all ours are still in storage in uk. No I'll see was his answer.


Luckily we found a fantastic outdorr mountain shop not far away with said nets and again I asked the above qu with same answer. To be asked a couple more times.


Arrive home it's sweltering hot and still no drill he decides to try and hand screw the hooks into the ceilings. 1 st room went ok, 2 nd and 3 rd room disaster. Sweat pouring down both our faces and bodies dripping, kids running riot and being little buggers he says ' I can't do this without a drill'


The resultant conversation resulted in us not talking for an hour and me wondering why men simply don't plan in advance and make everything unnecessarily difficult. And let's not get into parking earlier in a too small space with obvious results!!!

Like the lift in Myer's, life has its ups and downs.