Everybody else is perfect ...

... Or so I thought until I went to an old friend's new massive straight-out-of-Vogue-Living-designer house and discovered their shockingly messy bedroom. I'm now convinced that everyone has mess SOMEWHERE or something sinister lurking somewhere--even the most seemingly perfect, tidy stick figure family type people.

I've tried forever to be MISS PERFECT ON THE OUTSIDE, having my kids arrive at school on time with hair combed and clean uniforms, stocked up with an immaculate healthy all-food-groups-represented lunchbox, with everything labelled beautifully from Stuck on You which I pre-ordered two years before they even started kindy! And, yes it's just a TOTAL FRONT for the teacher and the other PERFECT mums which hides the noise and chaos happening on the inside. And there is often ABSOLUTE chaos occurring at home to get the darlings to school in this condition.

In another lifetime I could have been Baron Von Trapp. I would love to have had that whistle and command over the kids. 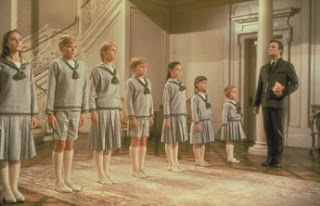 Maybe it was the old school teacher in me.

However, in all this chaos that has gone on, I wasn't 'present' most of the time. Instead of listening to Hammerhead's delightful breakfast banter I was too busy working out how to make the best angry bird sandwich--which he has since politely informed me has ALWAYS ended up as a mess of ham and cucumber when it came time to open his lunch box. I wasn't listening at all. 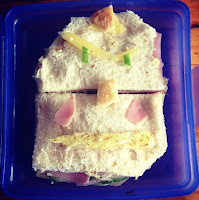 So I have learned that my quest for perfection has been a complete waste of time. And here are some of the observations that have led me to this conclusion ...


Our school is in a fairly affluent area. Lots of old houses (just like ours) are being demolished so big mansions can be built. There is the full black 4WD brigade happening, complete with stick figure family on the back, and I am the one who parks around the corner because the only thing stuck on my ANCIENT Saab is three layers of bird shit. Nothing against black 4WDs mind--my own sister has one! Most of the mums on the school run are wearing their gym gear, with a smattering of women in full corporate attire--always very glam. The gym gear women just pure and simply make me feel inadequate. Some of them even have a full head of make up happening and look like they are off to lunch. I reflect on the time that I joined the local gym and went there three times in six months. 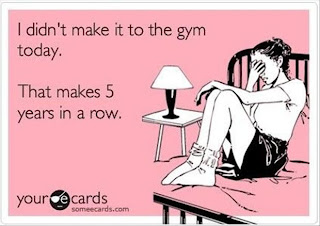 But these seemingly perfect mums are often not what they appear. A gym gear mum approached me at the school bag drop off the other day to invite me to a park 'thing'. In the course of the conversation I said, "How good are you always doing exercise after the drop off?". She replied "Nah, I actually don't exercise, I just wear this stuff to make me feel like I am doing some exercise. I am actually off for coffee and cake!" She was serious. She said that not only was she NOT a gym person, she never even went for a walk! She just liked wearing gym gear ALL DAY because it was comfy. 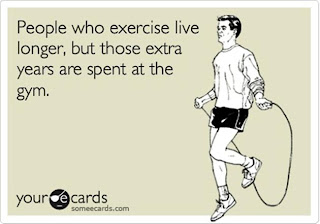 Then there was the parents-meeting-the-teacher night at school. I drove down there at dusk and parked in my usual spot, forgetting that it was going to be totally dark at the end of the meeting. An hour later, the walk back to the car across the oval through the bush track looked like the setting for the Blair Witch Project. But to my rescue came a bubbly, perfectly-coiffed young mum who kindly offered to drive me around to my car. I had never met this woman before yet we were bound to be seeing a lot of each other in the future.

"Now my car's a bit messy," she volunteered.
"Oh pulllllllease," I said. "I'm sure mine's worse".

It wasn't. Her car being a 'bit messy' was the understatement of the year. There was toothpaste all over the front seat which she spread a towel over for me to sit on. When she opened the door for my side, all of this stuff fell out onto the ground and I am fairly certain I saw a wet nappy and a half eaten happy meal. Then everything that was in the spot that feet would normally go in the passenger side, was scooped up and just thrown over into the back which was knee deep in what can only be described as rubbish. I'm talking stuff that should just be in the bin; not kid's books, toys, and unmatched shoes--which is what you'd find in my car on any given day.... I'm talking REAL rubbish. Bless her.


All I could think of was how kind this woman was offering me a lift knowing her car was a mess. She didn't even seem embarrassed by this mess. And then it dawned on me that she probably didn't even notice this mess. She was just comfortable to live like that and didn't care what people thought. 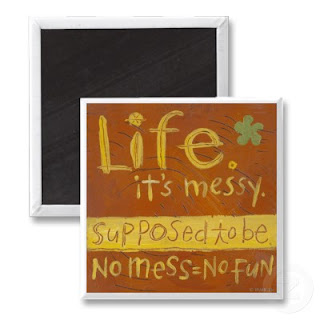 Then I happened upon the series Making Couples Happy on the ABC. If you haven't seen it at all watch it here on iView. These poor couples have some BIG marital issues yet probably present as the perfect family at the school gate. Then again maybe not. I mean why pretend to be perfect when you are just going to go on national television and expose intensely private matters to THE WORLD????

There was one lovely woman who had been married for 29 years, sitting next to her lovely husband, telling the interviewer that she was no longer attracted to her husband in any way, shape or form, and basically could not stand the sight of him. And the husband is just sitting there, nodding syphathetically, listening to it all like she is talking about how she felt when the cat died! I felt so sorry for this man. HM was absolutely MORTIFIED! We couldn't for the life of us work out why you would want to go on television, having all of your mates, work mates, school mums, people from the shop and of course, your own family watching it and knowing ABSOLUTELY EVERYTHING that is usually hidden, unsaid or at the very least, discussed behind closed doors!!!

Is it that some people just crave to be a reality star no matter what they have to bare? OR are they so desperately unhappy with their non-perfect life that the only way they think they can save their marriage is by exposing it all for independent review? On watching the last episode tonight, I'm thinking it's the latter.

So there. Now I know that even the most perfect looking family at the school no doubt has some background nonsense factored in. And I feel better for that. In conclusion, I want to add that by starting this blog, aside from providing me with an outlet to rant into the ether, I have also become ensconsed in several fantastic and insightful blogs written by normal real women (just like me) who want everything perfect and get a little depressed when it isn't. To all of you wonderful and beautiful blogger ladies, I THANK YOU. If you've received a comment from me at any time that means YOU!

Really enjoyed your post - felt myself nodding at the wish for the control like the Von Trap Family, laughing at the messy car and relating to the majority of your post. Wonderfully written.

Thanks for stopping by Jacana... I never think anybody reads my posts so it's nice to hear from you. Haven't written for a while but will get back to it shortly once my work dies down. :)